The Smaller Footprint of Community Solar

Even with the stark differences between the clean energy produced by solar power and the negative environmental impact of burning fossil fuels – solar energy isn’t perfect.

Even renewable energy sources leave a carbon footprint. In 2014, the National Renewable Energy Laboratory screened 400 studies and assessments of the carbon footprints of solar, wind, nuclear, natural gas, and coal – accounting for variable contributing factors and discrepancies to the data.

To no surprise, fossil fuel-based energy generation produces more carbon dioxide per kilowatt-hour (kWh) than any renewable source. While solar leaves a carbon footprint, it’s relatively small (and getting smaller) compared to traditional fuel sources. Today’s solar panels – up to 50% more efficient than those used in the studies leading up to 2014 – make the carbon emissions gap between solar and fossil fuel-based sources even wider. 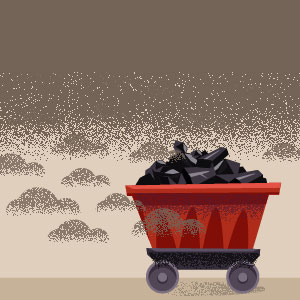 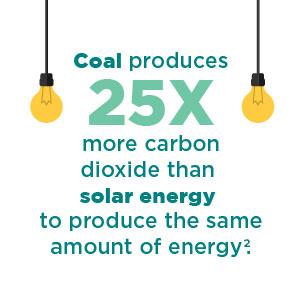 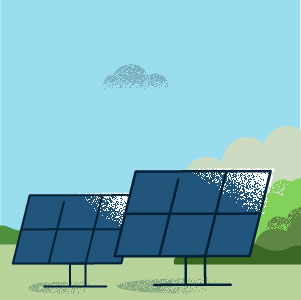 The Source of Solar’s Carbon Footprint

Silicon for solar panels is mined from quartz and is cleaned and heated in a furnace. This process emits sulfur dioxide and carbon dioxide into the atmosphere. The production of panels uses other metals, such as aluminum and copper, whose mining and manufacturing processes also utilize fossil fuel sources.

In the preparation of silicon for wafers for panels, one of the most toxic byproducts is silicon tetrachloride, which can burn your skin, lead to harmful air pollutants, and release hydrochloric acid if exposed to water. Manufacturers reduce silicon tetrachloride’s health and environmental risks by recycling this toxic chemical safely back into the manufacture of new silicon wafers.

Thin-film solar panels may contain cadmium telluride and copper indium selenide, chemicals commonly used to make electronics like laptops and cell phones. While they’re not hazardous while the panel is in use, these chemicals can be dangerous during manufacturing. There are also concerns about the long-term impact of these chemicals when panels are disposed of.

The Power of Technology

Solar tech companies have been exploring new and better ways to manufacture panels that further reduce the carbon footprint, and studies show ongoing efforts like these have paid off. A 2016 study reported that overall emissions produced in the process decreased by 17-24% each time install capacity has doubled in the last 40 years. It is important to remember that solar technology is still in its infancy. Because it uses technology to create energy, it will continue to evolve and become more efficient and environmentally friendly. In comparison, fossil fuel energies can only be burned as a fuel source.

Moore’s Law says as technology innovation accelerates, production costs go down exponentially over time. In a relatively short amount of time, the efficiency of solar and the use of new technology already make solar an infinitely better alternative to fossil fuel sources. We can expect to see vast improvements in reducing solar’s carbon footprint as we improve the technology to produce panels and convert the sun’s power and store its power efficiently.

While there’s been exponential growth in solar installation and community solar, there are no industry standards for recycling/reusing materials. Regulations and best practices for solar panel manufacturing and recycling are acknowledged growth areas for the industry. Savvy solar companies steer clear of working with panel manufacturers that don’t use environmentally friendly practices and safely recycle byproducts. Nelnet Renewable Energy’s current partners prioritize working with companies with disposal plans in place now, even though it will be 20 plus years until our oldest projects’ panels will be past their useful lifecycle.

While solar energy still has a carbon footprint, making the switch to renewable energies like community solar represents a huge step towards reducing the known environmental hazards created by burning fossil fuels – and a sure way to reduce your carbon footprint. With time, that choice will be even clearer.

Are you ready to save on your energy costs and help the environment? See if you’re eligible to join a community solar project near you.