Solar Energy Works Year Round for You

You would expect solar panels to perform best on hot, sunny days and in climates that enjoy a greater number of those days. You may be surprised to learn a few things about how solar panels perform under different conditions – and that overall exposure to ultraviolet light on a long-term basis is what matters when it comes to the effectiveness of solar panels.

Commonly known as solar panels, photovoltaic (PV) panels can use indirect or direct sunlight to produce power, although direct sunlight makes them most effective. When light is partially blocked by clouds, solar panels still work – and even on days with heavy cloud coverage, solar panels will generate, on average, 10 to 25% of their normal power output.1 Rainy days are even helpful in the sense that rain washes away dirt and dust from solar panels, helping to keep them operating efficiently. 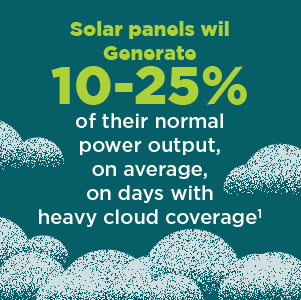 Excess energy generated by your rooftop or community solar panels during sunny hours is used to offset the energy you use at night and other times when the system isn’t operating at full capacity. While solar panels operate at a reduced efficiency on cloudy days, the amount of sun solar panels receive overall throughout the year is what matters with net metering.

A common myth is that solar panels are less effective during the winter. Since exposure to direct sunlight and ultraviolet (UV) rays increases the energy output of solar panels, cold climates that enjoy a large number of sunny days can still be a good environment for solar. Temperature doesn’t play a major role in the overall performance of solar panels. In fact, solar panels are similar to electronic devices in that they function more efficiently in colder temperatures than in hot weather conditions, increasing their energy production.2

A light dusting of snow won’t greatly impact solar panel efficiency, but if too much snow builds up, it can reduce energy production. Solar panels are installed at an angle to optimize exposure to UV rays and reduce the buildup of snow. In colder climates that get large amounts of snowfall, developers often install solar panels without frames, making it easier for snow to blow and slide off – and prevent accumulation. In fact, similar to rain’s cleansing properties, snow also helps maintain optimal functioning of solar panels by removing dust and dirt.

Excess energy generated by your panels during sunny hours is used to offset energy you use at night and other times when the system isn’t producing as much energy. During winter’s shortened daylight hours, there’s a reduced amount of time a solar panel works at full efficiency, but in most areas, there’s still enough daylight to make solar panels worthwhile.

With community solar, the energy your solar farm produces helps to reduce fossil fuel energy usage all year round – and it saves money on energy costs for those who participate, too. Plus, community solar offers you a chance to put solar to work for you – year-round – without paying the upfront or maintenance costs of traditional rooftop solar. Any time is a good time to sign up for community solar. Find a solar farm today.

Are you ready to save on your energy costs and help the environment? See if you’re eligible to join a community solar project near you.